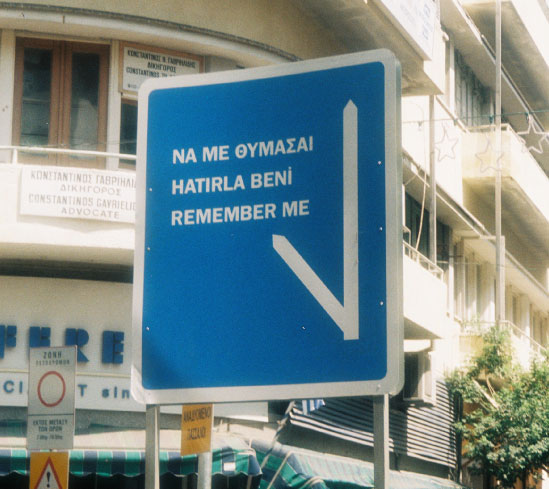 Remember me was presented at the group exhibition Leaps of Faith that took place in the buffer zone and the city of Nicosia, and curated by Katerina Gregos and Erden Kosova.

In her text Getting To Know Each Other, Katerina Gregos says that “Panayiotis Michael’s road signs offer a textual message which is much more ambiguous and can be read both on a personal level as well as a political one. The words ‘Remember Me’ are inscribed in three languages: Greek, Turkish and English representing the three most influential powers of the island. While it plays on the archetypal Greek Cypriot ‘I Don’t Forget’ (the 1974 invasion) and the Turkish Cypriot ‘ We Will Not Forget’ (the inter-ethic communal violence 1963-1968), the words may acquire different significance for different reasons all depending on one’s own perspective.”

Erden Kosova, in his Cowboys and Angels text, argues that “Panayiotis Michael’s traffic signposts offered a performatively constructive and progressive use of memory, a notion that is employed by the nationalist positions as a source of reproducing mutual resentment.”